Revolution: To turn around. But then where are you?

Revolution: To turn around. But then where are you? Are you not still where you were? What have you gained? A new master? A new whip? Today is Tuesday November 5th, 2013. Today some people will attend protests asking governments to behave. Today many Americans will stand in line to vote, asking government to behave. Both these activities are aspects of “the political process” and it is a form of control where people are allowed to believe they have some influence over their masters. It’s part of the illusion. It keeps the tax cattle happy by letting them believe they have a say in their fate, and it allows the masters to believe that they have the permission of the slaves.

I read a story about one of the gaurds who force feeds prisoners in the detention camp at Guantanamo. He claimed that what he did wasn’t torture. He simply straps the prisoner into a chair that the prisoners call “the torture chair”. Then he asks if they want a lubricant. Then he shoves a tube up their nose, through their sinus cavity, and down their throat. Then he pumps liquid food into their stomach. Of course they have to keep the prisoner in this position for some time, to keep the prisoner from throwing up the food. This process forces the prisoner to live longer so other methods of interrogation can be used to extract information.

Voting and protesting are much like telling your handler which nostril you would prefer to be violated and how much lube he should use. Personally I won’t give him the satisfaction of answering his perverted question. 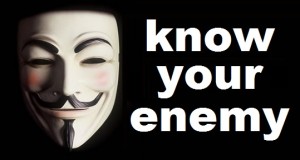 And I went down to the demonstration
To get my fair share of abuse
Singing, “We’re gonna vent our frustration
If we don’t we’re gonna blow a 50-amp fuse”