Shake That Tree To Its Roots
by Ben Stone

Alright!
Enough picking at the low hanging fruit! It’s time to give this tree a good shaking and see what breaks free and what clings to the branches for security.

I don’t know if it’s noticeable or not, but there’s an underlying theme or perhaps an underpinning storyline to my writings. Take the following list of articles available at Bad Quaker Dot Com and notice the brief summary I have attached here:

I have used the Bible and theology and I have used scientific theory to demonstrate my belief in a divided humanity. However Frank Chodorov perhaps made this distinction clearest when he said:
“On the other hand, give a course in classical economics, or teach a group the meaning of natural rights, and some, though they have absorbed all the words of freedom, will come away entirely unconvinced. Some emotional blocking prevents the ideas from taking root. And this is also true of all the collectivistic professors; they read all the books which the individualist holds most dear, but the reading leaves them cold to the ideas; they are collectivist because nature inclined them toward collectivism.”
And again Chodorov pointed out;
“…neither education, background, nor income can explain either the socialist or the libertarian. Whenever you try any of these criteria you are faced with cases that refute your premise; you find that both types come from penthouses and slums, that they include Ph.D.’s and illiterates. You are driven to the conclusion that if there is a causative principle it must be found somewhere in the makeup of the person rather than in environmental influences. ”
Or to put it more simply, Chodorov said, “That is to say, the libertarian teaches not to “make” libertarians, but to find them.”
So an overview of my theory would begin by explaining that something happened, some event took place that caused a divide in humanity. Those tending toward socialism and the law of Man are on one side of this divide and those tending toward individual liberty and natural law are on the other side. One of these two groups will survive the ravages of time while one will not. And it should be noted that I view the State as a developing and maturing entity both serving and feeding upon all who will tolerate it. The State is the creation of the socialists but it will more than happily feed on the libertarians if, in their slothfulness, they choose to host it. Additionally, the State is inherently unstable economically and entirely void of morals.
So then building on this foundation, I believe the course of the State is to grow and absorb all lesser manifestations of itself until it exhausts all available space and food, like some deadly mold infecting everything it encounters. ( The State and Mold) As it does this, the State will become more and more oppressive and its appetite will grow unquenchable until in desperation it will turn on its most faithful supporters and devour them. To say it plainly, the State will never stop until a one-world government dominates all aspects of civil society and controls all known sources of productivity. The emphasis here is on “civil” society and “known” sources of productivity. You see, the State has never been able to control sub-cultures of society nor has it ever been able to successfully combat black markets. And so we see the weakness of this Great Beast and with it we see the weapon that will strike the deathblow.
Hidden productivity and black markets in every conceivable commodity will be developed. Networks of private communication and codes of speak will be worked out. Messages in images, clear to those in-the-know, while strange and hidden to the masses, like gang tags 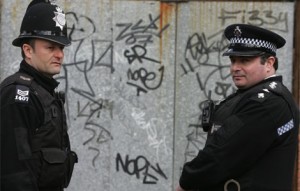 of liberty on the overpasses of the State, will guide the liberty minded to select locations and safe houses as they avoid the eyes of the herd. And make no mistake on this point; libertarians will never be the majority as long as the State lives. So the masses will not only be the tools of the State but at some point they will become openly hostile to us, as the State eventually singles us out as the cause of all its failures. Shortages and oppression are the hallmarks of socialism and the population purges of Hitler, Stalin, Mao, and Pol Pot will pale in comparison to the future this world faces when the Beast comes into its maturity.
We exist today in a brief window of relative freedom that is quickly closing. How we in this generation and the next, prepare and take advantage of this pause before the battle, will determine the duration of the battle and the depth of suffering our side endures.

At this point of the discussion it becomes necessary for me to do something I have never done before on the pages of Bad Quaker Dot Com and something I have rarely done at all in the last thirty years. I must attack a religious doctrine. I don’t take this step lightly nor do I take any pleasure in the task. It’s generally my policy to allow people to believe anything they feel comfortable believing so long as they respect my beliefs in return. But on the topic of the so-called “rapture” I must speak out. It’s my contention that the doctrine of the rapture was introduced into Christianity by some of the vilest creatures ever to call themselves “Christian” for the express purpose of weakening those who would naturally be sturdy opponents of the State. The idea that Christians need not make preparations for the coming hardships because at the last moment they will be whisked away to safety is a sick retched joke conceived by none other than that enemy of liberty Cotton Mather, and later picked up by hucksters passing out sugar coated dreams in return for full collection plates.

Murray Rothbard said this about Cotton Mather in volume 2 of his masterpiece Conceived In Liberty:

The Reverend Cotton Mather, always an eloquent and leading spokesman for despotism, warned the slaves and servants in a sermon that “there is a Fondness for Freedom in many of you.” Mather advised the slaves that they were living better materially than they would be under freedom; furthermore, slavery had been appointed for them by God. Singing—for others—the siren song of supposedly contented and blissful security, Mather purred: “Your servitude is gentle . . . you are treated, with more than mere humanity, and fed and clothed and lodged as well as you can wish for, and you have no cares upon you, but only to come when you are called, and to do what you are bidden.” All the subjects must do, in short, was to surrender their naturalborn gift of freedom and independence, to subject themselves completely to the whims and commands of others, who could then be blindly trusted to “take care” of them permanently.

During the 1980’s the rapture doctrine was enjoying almost universal praise by the televangelist crowd. At that time I knew Christians who ran up massive debt because they were convinced they were about to be taken away. They would actually take out loans and give the money to evangelists under the delusion that they would never have to repay it since they would be flying off into the clouds at any moment. A quick Google search into the history of the rapture will reveal it as a relatively new scam, but perhaps a stronger case can be made against this doctrine by simply asking what fruit it produces. Does it produce a Christian who can endure hard times and stand as a testimony to truth and responsibility or one who expects to escape the consequences of his actions?

Where, then, does this leave you and I, a decade into this twelfth millennial since the birth of the State?

If we are wise, we’re making preparations for the dark days ahead. We’re seeking ways to separate ourselves from dependence on the State and its puppet corporations. We’re learning the skills of our forefathers and seeking ways to feed our families and ourselves when the Just-In-Time inventories of the grocery chain stores fail. We’re building networks of like-minded individuals and developing the backbone of future underground railroads to carry to freedom those the State attempts to devour.

This completes the life cycle of the State. Its conception was in the fall of humanity when we chose Man’s law over the natural laws of our species. When the State was born in the fragrant valley of the Jordan River, we failed to smother it in its crib, as we should have. As it grew and tested empire after empire, we tolerated it until it suddenly went out of control and, for the first time, threatened global dominance during the last century. Now that global dominance is immanent and we know that fighting it using its violent weapons will only strengthen it. We can only defeat it by ignoring it, by defunding it, by engaging in free trade, and by peaceful voluntary association. As we find paths around the State and its puppets, we render it impotent and inconsequential. And as it enters its final death throes and begins thrashing about destroying everything within reach including its supporters, we must simply move out of its reach and let it die.

As I’ve said before, if one full generation passes State-free, we will have won and we will once again enjoy the bounties of liberty. But for now, take a look at yourself and your life and ask yourself if you are ready for this tree to shake right down to its roots.