If you are like most Americans, you have a few extra pounds that you’d like to get rid of. If you have been living under a rock, or are one of the few intelligent human beings left alive who don’t watch news, you might be unaware that this nation is in the middle of an “obesity epidemic.” While I might be disinclined to agree with the principle of an obesity epidemic, after all, the criteria for being obese is so very broad and encompassing as to render it nearly useless, I will agree that as a nation, we do seem to have gotten chunkier in the past thirty years. As health minded citizens, we should look to the causes of the weight gain phenomena, and look to solve it. I have stated many times in the past that it is useless to attack symptoms; you must look at what the cause of the problem is.

So we look to the cause in the weight gain of Americans. The most obvious one is a matter of statistical manipulation. According to the CDC, American males have grown in height by about an inch, and have gained about 25 pounds since 1960. This seems a disturbing trend, but really you ought to look closer at the numbers. The median age of Americans right now is 35.3 years old, while in 1960 it was 29.5. So you can see off the bat that the idea of an “obesity epidemic” is largely made up. Yes, the average weight of Americans has gone up, but so has the age. And while 25 pounds is a lot, 25 pounds from your late 20’s to your mid thirties… well that’s easily explained by a change in lifestyle. As a whole, American’s aren’t kids anymore. We’re middle aged adults, we’re working an average of 46 hours a week, while in 1960 we only worked an average of 36.5. So, we’re working more, we’re older, and we weigh about 25 pounds more. Hardly what I’d call an “obesity epidemic.”

However, all of those facts aside, we should look at the rise of obesity. As charts like this: 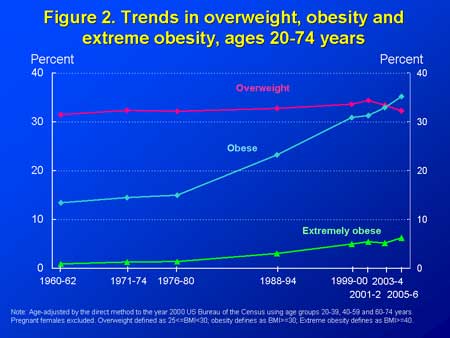 show, obesity is on the rise (so is our population, but again, we’re putting aside that argument). So the big question is: why? Why are people getting fatter? Well, let’s take a look at that chart up there. Something had to have happened somewhere in 1976-1980 to cause our waistlines to expand. What was it? Well, I’d like to start with this link: http://www.nal.usda.gov/fnic/history/index.html In this link, we can see the food guides being put out by the United States Government starting in 1894. Granted, some of these are difficult to see, but pay special attention to this picture: 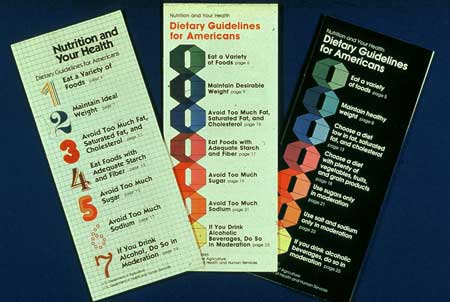 The one on the far left of the screen is the dietary guidelines from 1980. As far as I can tell from my research, this is the first time the federal government warns against “too much fat, saturated fat, and cholesterol.” Before this time frame, the official stance on eating was to eat a “balanced” diet; one in which grains, dairy, meat, and vegetation were all consumed in the same quantities. 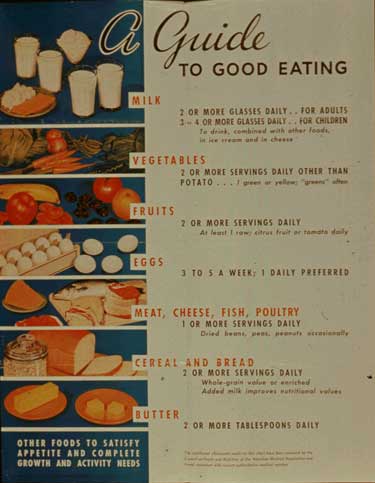 Here’s where the really interesting part comes in. A serving size has remained pretty much the same, however, we have gone from eating 2 servings of bread, 2 servings of milk, two servings of meat, and two servings of vegetables to eating double the amount of bread, and double the amount of milk. Now the “Food Guide Pyramid” would have us eating 6-11 servings of grain, and yet the same amount of vegetables, fruit, nuts, dairy, and meat as always. (see this link) So, since 1979 we have increased our grain consumption from 2 servings a day to 11 servings a day, and our recommended servings of everything else has stayed the same. Interesting, isn’t it, that at the time that grain consumption began to rise, so did our waistlines. Let’s dig deeper into this. Here’s a graph showing the consumption of meat since 1960: 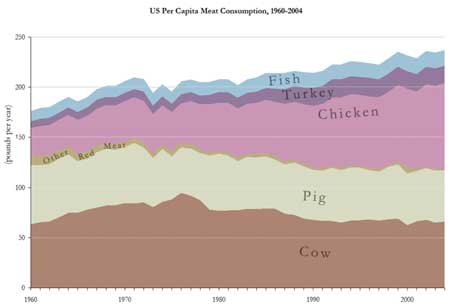 and grain consumption increased by 45%. (see this link) The trends can be seen even more dramatically here: (see this link) And so, what are the conclusions? Well, obesity began to rise around 1970. Also around 1970, the United States Federal government began officially supporting the position of eating more grains. I don’t think this proves that eating grains makes you fat, but it is awfully interesting. So let’s look a little bit closer at the why. Our question is now: why does the United States government want its citizens to eat grain.

The first answer is the most common. It’s what most people on the street will tell you. It’s what the chefs on TV say. It’s what your doctor [1] will say. It’s what the federal government will say. The answer that is most common is: “Eating heart healthy whole grains lowers your risk of diabetes, stroke, and heart disease, while eating artery-clogging saturated fat leads to high blood cholesterol, heart disease, and strokes. Eating a diet high in fat also leads to gaining weight, while a diet in whole grains will make you feel full longer, and lead to weight loss.” These statements have their roots in a study done by Ancel Keys. Ancel Keys, and other “scientists” convinced a panel of federal government goons that animal fats were the problem, and grains and vegetable oils were the solution. You can watch more about this here: Big Fat Lies and here: Why You Got Fat

So, if “heart healthy” whole grains are bad, and they are proven time and time again that they are, and “artery clogging saturated fat” is good, and it’s been proven again and again that it is, then why does the federal government push grains so much? We’ve removed the “health” answer, so now we’re back to the question: why does the United States government want its citizens to eat grain?

I don’t buy it. I just don’t think our government is that intelligent. No, I think it’s far more likely that a simple answer is in order. Greed. As the movie Fat Head points out, if you want the answer, you have to follow the money. Who were the people and organizations that pushed this theory? Fat Head would have you believe that it is the vegetarians (Fat Head movie segment). That’s a plausible theory, but I have a different one. Let me ask you a question. If you had a business that made drugs that “treated” high cholesterol and obesity, would you: A) want people to be less obese and with low cholesterol OR B) want people to have MORE obesity and high cholesterol? Oh, and what group lobbies the most in Washington? One more piece of damning evidence: the group of drugs called statins. Statins lower cholesterol and Merck began to show interest in the Japanese research of statins in 1976.

So we have a group of companies who lobby the government the most. They began to show interest in a drug that lowers cholesterol. A few years later, the federal government ignored valid scientific studies proving that grains cause diabetes and high blood cholesterol, embraced pseudo-science and began its “whole grains” campaign. As it turns out, that made Americans fat and full of high cholesterol. Which led to doctors prescribing statins.

I’m not making this stuff up. It’s all right there on the internet. Go look up the facts. Then go eat some bacon.

Coyote Vick
2011
Coyote Vick is a staff writer at Bad Quaker Dot Com
More by Coyote Vick can be found at crapimanadult.blogspot.com

[1] footnote:
[1] Incidentally, it must be should that while your doctor might make dietary recommendations, they often do so without ever having received any nutritional education. Doctors are not, in fact, required to take any nutrition courses to become doctors. So the notion of your doctor being an “expert” in nutrition is in fact, false. Your doctor knows as much about nutrition as you do.